Antique scroll flasks are easy to spot thanks to their distinctive shape.  While aqua is the most commonly found color by far, other brilliant colors (greens, ambers, blues) are not infrequently encountered and fetch top dollar by collectors.  George and Helen McKearin described the scroll (or violin) flasks in their book, American Glass, in the 1940s with details on 51 different molds.  This list was later expanded with many variants in American Bottles and Flasks and Their Ancestry.  Often, the difference between molds for scroll flasks comes down to the precise placement and shape of embossed stars and other details. 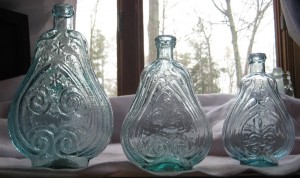 A group of scroll flasks in quart, pint and half-pint sizes.

As with all historical flasks, the rarity of bottles of a particular mold is the greatest driver of value.  Color follows closely; collectors pay significantly more for rare colors in any mold over a commonly found aqua example.  Condition is always a consideration – as we often point out here at Historic Glasshouse, even minor damage takes a big bite out of value.

Scroll flasks were made by blowing hot glass into a two piece iron mold.  The hinged mold was then opened and the bottle was removed while still attached to the blowpipe.  An assistant would then attach another rod (called a pontil)  to the base of the bottle.  The glass blower could then detach the bottle from its lip by shearing the still soft glass.  Most often you will find scroll flasks with a plain sheared lip. 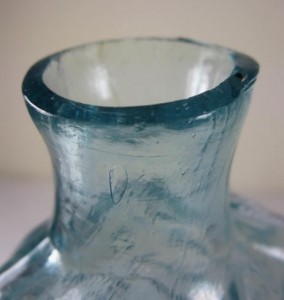 A sheared lip on a historical flask.

Some flasks would receive additional work to finish the mouth and lip.    Commonly found are the applied band of glass and, infrequently, an applied lip.  See the group shot above.

Most 19th century scroll flasks will have a pontil mark (sometimes pontil scar) on the base.  These will most always take the form of a ring of glass (“open pontil”} or a grey metallic circle (“iron pontil”)  Collectors place a value on the quality of the mark – large and bold marks are considered to be more desirable. 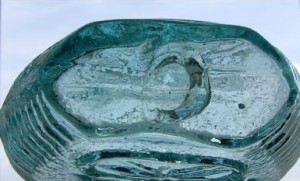 Open pontil mark on base of historical flask 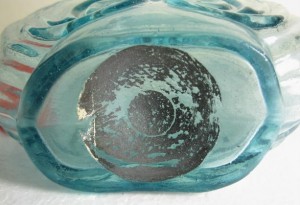 Look carefully along the medial rib of the flask for signs of cracks or bruises.  It can be difficult to see cracks especially when the glass is thin.  Be sure to hold the bottle up to the light and rotate it slowly looking for lines in the glass which change as you move the bottle.  Also inspect the base edge and mouth – these are two common areas where chips, bruises and flakes occur with use.

How do you tell an original from a reproduction?  Often it is not easy.   I have found that the glass on reproductions is often much heavier than on an original.  However, knowing the right thickness of the glass is a matter of experience.  Another consideration is the size:  I am not aware of any reproductions in the quart size – every one that I have seen is a pint.  Brilliant colors should also be a clue to age; while you will see both originals and reproductions in sapphire blue and various greens, ruby red and  brilliant colors should be at the least a warning sign of a modern piece. 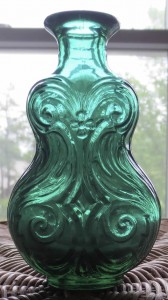 This reproduction scroll flask was made by the Imperial Glass Corporation, late 20th century. 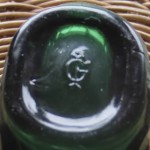 the base shows the mark of Imperial Glass

Common aqua scroll flasks will generally fall in the $50 to $150 range, depending on condition and quality.   Deeper aqua hues command a somewhat higher dollar.  Rare molds and better colors easily move the bottle into the $500 to $5000 range.  If you want to get specific about value then submit photos and details via my antique bottle appraisal service.