I recently exchanged emails with John Keys after stumbling upon his bitters ingredients auctions on ebay.  For about $10, you can recreate the 19th century experience of the bitters consumer – with great historical accuracy.  His product line is called Wild West Bitters – you will receive the herbs and spices used in many of the popular bitters formulations known well to antique bitters bottle collectors today.

The unique ingredient packs from Wild West Bitters make it possible to reproduce, in one’s own kitchen, many of the bitters that were sold in the patent medicine era of the late 1800s. The product line is the result of 40 years’ research on the part of John David Keys of Stephenville, Texas, who felt that antique bottle collectors and many others might find it fascinating to experience just what was originally inside those bottles.

Keys scoured through distillers’ formularies, pharmaceutical dispensatories, period advertisements, medical writings and judicial reports in his quest for reconstructing the formulas, or recipes, for the bitters. Chromatographic chemical analysis of rare surviving bottle contents was also employed. Lastly, Keys relied on subjective assumption for many of the bitters.

Claimed originally as having miraculous curative powers, most of the patent bitters of the 1800s were in reality simple stomachic digestives. In fact many of them were consumed as “recreational” beverages, much like Jägermeister is today. The bitters that can be prepared from the Wild West Bitters ingredient packs are intended as “recreational” beverages, and no medicinal properties are implied. Keys himself regards the line as “history you can recreate, experience and share”.

Fifty varieties of Wild West Bitters ingredient packs are available exclusively on eBay. Wholesale sales are offered for 12 of the more popular items.

Is this not amazing? 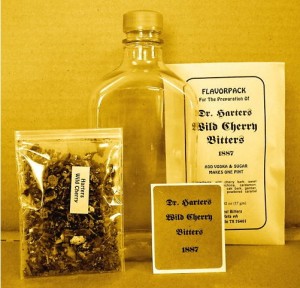 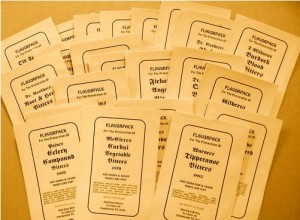