It is not uncommon to see glass battery jars at antique bottle shows.  A friend recently showed me his collection and I was just reading an article on Henry Ford and Thomas Edison’s efforts to build an electric car – these two moments inspired me to create this battery jar page.

Battery jars are simply a straight sided round or square glass jar which was used to house a conductive solution of either acid or copper sulfate. Several 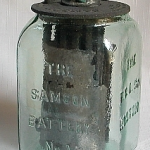 different technologies emerged in the 19th century, the most significant of which were (at least from the perspective of the battery jar enthusiast):

Although Thomas Edison patented the solid nickel-iron battery in 1903, there are many Edison wet cell jars in existence as well as Edison battery oil jars.  See the Wikipedia page on battery history for more information.

We are not entirely sure of the nature of the demand – it is probably a combination of collectors who specialize in battery jars as well as enthusiasts of 19th century history and re-enactments. We found some discussion online of battery jars and their use in telegraph (Morse Code). See the figure below showing Civil War re-enactor Robert Feeney with his functional telegraph station complete with two wet cells in battery jars.

As with all glass items, condition is of utmost importance. Damage in the form of chips or cracks greatly hurts value. Battery jar value also depends on related parts – if you have the lid and “guts” they are far more desirable. It is also important that any metal parts be free of corrosion – if the interior parts are corroded, then adjust your value accordingly.

We have noticed auction prices on ebay mostly between $20 and $60.  The large rectangular 20th century jars are often worth in the $20-30 range and earlier 19th century examples can reach beyond $100  if in exceptionally good shape.  A Gravity cell with both interior electrodes in remarkable unused (like new) condition recently brought $230 on ebay

You might think that battery oil is for lubricating the moving parts of battery jars, but there are no moving parts! Instead, battery oil had the specific purpose of creating a thin film of oil on the surface of the liquid inside the jar to help prevent evaporation of the electrolyte solution.

My friend Peter recently acquired a battery jar marked NOSMAS (see photo below).  We had not heard of it and thought it might be scarce – then he emailed me to say “EPIPHANY!” (I say D’oh!) it is SAMSON spelled backwards.  Who knows how many of these error jars are out there.  Let us know if you have seen one. 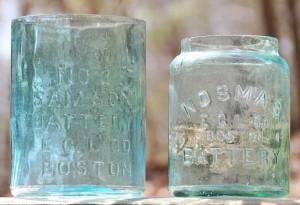