Preservatives and additives in food. Plastics leaching dangerous compounds. Food and products from overseas may be tainted. Sounds like the topics of today’s news but Americans back at the turn of the 20th century were equally concerned about their food and medicines.

The Pure Food & Drug Act, enacted on June 30th 1906, brought widespread change to the patent medicine and food industries. The antique bottle collector will find a dramatic change in the markings and labeling of medicines, alcoholic products and other bottled goods after January 1907, when this law went into effect.

The Act required that:

Ingredients including “any alcohol, morphine, opium, cocaine, heroin, alpha or beta eucaine, chloroform, cannabis indica, chloral hydrate, or acetanilide, or any derivative or preparation of any such substances contained therein” must be clearly labeled by quantity or percentage. It is not uncommon to find bottles from this time period to be clearly marked with the percentages of such compounds along with text such as “Guaranteed under the Pure Food and Drug Act of 1906.”

Interestingly, Section 2 allowed for export of “adulterated or misbranded or poisonous or deleterious foods, drugs, medicines, and liquors” to other countries as long as the ingredients were not specifically banned in the country of destination. Unbelievable, isn’t it? As a country, we decided what was dangerous for our own citizens, but that didn’t stop our businesses from sending such products to other countries. Unfortunately, this practice continues today with, for example, US tobacco companies increasing their marketing efforts overseas.

Imitations of popular products were banned. This was previously a common practice: medicines with similar names and similar packaging attempted to cash in on the success of popular brands.

Section 8 dealt extensively with “misbranded” products. Extensive language banned the use of false or misleading claims, ingredients, substances or language. Reggie Lynch at antiquebottles.com suggests that the word “cure” was effectively banned by the Act. While I can find no citation for this fact, it seems reasonable that the scope of the Act had an absolute impact on a number of particular words such as cure, remedy, panacea and the like.

Read the entire text of the Pure Food and Drug Act of 1906. 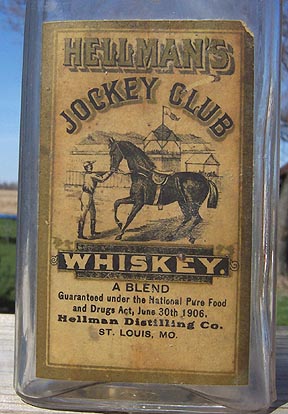